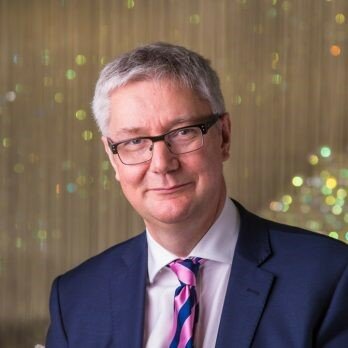 Andrew Morris became the inaugural Director of Health Data Research UK (HDR UK) in August 2017. HDR UK is the national institute for data science with a mission is to unite the UK’s health data to enable discoveries that improve people’s lives. He is seconded from his position as Professor of Medicine, and Vice Principal of Data Science at the University of Edinburgh, having taken up position in August 2014. Prior to this Andrew was Dean of Medicine at the University of Dundee. Andrew was Chief Scientist at the Scottish Government Health Directorate (2012-2017) and has served and chaired numerous national and international grant committees and Governmental bodies. His research interests span informatics and data science of chronic diseases. He has published over 330 original papers, attracted over £50 million in grant funding and the principal investigator of several programme grants.

Andrew was previously Governor of the Health Foundation (2009-2017), a leading UK charity that supports quality improvement in health care, and chaired the Informatics Board at UCL Partners, London (2014-2017). He is a Fellow of the Royal Society of Edinburgh and the Academy of Medical Sciences and awarded a CBE in the 2018 Queen’s New Year’s Honours List.

“It is a privilege to be invited for the ADR Ambassador Programme.  As we embrace the fourth industrial revolution and the impact that mathematics, statistics and data science will have on society, there is a huge opportunity to harness data analytics for the public good. At the same time there is an absolute necessity to demonstrate trustworthiness in how data are governed, accesses and analysed in the public interest.  Health Data Research UK is privileged to be working with ADR UK in our quest to develop and maintain the integrity of a trustworthy data ecosystem that delivers benefit for society. The UK has an outstanding opportunity to harness its inter-disciplinary skills and expertise to deliver impact on the lives of citizens of the UK and beyond”.